Ever wonder what days you should fly the flag? Or how about where to place state and municipal flags when grouped with the U.S. Flag? How about how to properly fold a flag? We’ve compiled a short list below for you to check out and brush up on your U.S. Flag awareness. 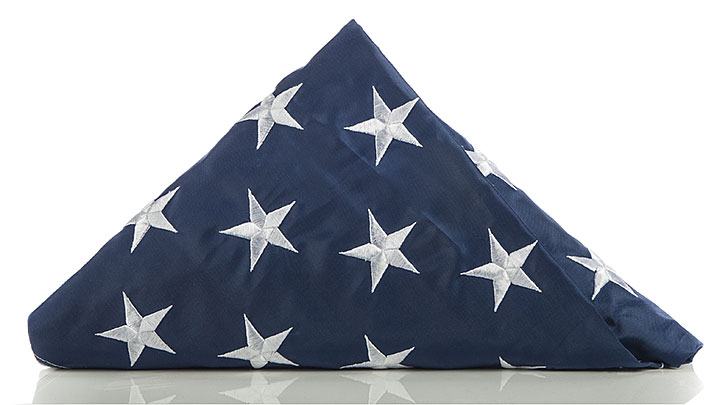 How to Display the
U.S. Flag

Where to display the U.S. Flag in accordance with other flags and how to illuminate the U.S. flag when it is displayed 24-hours a day.

Suspend vertically with the union to the north in an east and west street or to the east in a north and south street.

Suspend from a rope extending from a house to a pole at the edge of the sidewalk, hoist out union first, from the building.

On a Wall Mount Pole

Display from a staff projecting horizontally or at an angle from the windowsill, balcony, or front of a building, with the union of the flag at the peak of the staff unless the flag is at half-staff.

When not on a Staff

When on a Stage

The flag of the United States of America, when it is displayed with another flag against a wall from crossed staffs, should be on the right, the flag’s own right and the viewer’s left, and its staff should be in front of the staff of the other flag.

When in a Group

However, when flags of two or more nations are displayed, they are to be flown from separate staffs of the same height. International usage forbids the display of the flag of one nation above that of another nation in time of peace.

First hoist the flag to the top of the pole for an instant, then lower to half-staff. It is considered proper to raise to the top again before it is lowered for the day.

Section 4 of the Flag Code states, “The flag, when it is in such condition that it is no longer a fitting emblem for display, should be destroyed in a dignified way, preferably by burning.” We recommend that you contact your local VFW Chapter and ask them for help properly disposing of your flag.

The following codification of existing rules and customs pertaining to the display and use of the flag of the United States of America shall be and is hereby established for the use of such civilians or civilian groups or organizations as may not be required to conform with regulations promulgated by one or more executive departments of the Government of the United States.

The flag of the United States, for purposes of this chapter, shall be defined according to Title 4, United States Code, Chapter 1, section 1 and section 2, and Executive Order 10834 issued pursuant thereto.

A. It is the universal custom to display the flag only from sunrise to sunset on buildings and on stationary flagstaffs in the open. However, when a patriotic effect is desired, the flag may be displayed twenty-four hours a day if properly illuminated during the hours of darkness.

B. The flag should be hoisted briskly and lowered cautiously.

C. The flag should not be displayed on days when the weather is inclement, except when an all weather flag is displayed.

E. The flag should be displayed daily, on or near the main administration building of every public institution.

F. The flag should be displayed in or near every polling place on election days.

G. The flag should be displayed during school days in or near every schoolhouse.

That the flag, when carried in a procession with another flag or flags, should be either on the marching right; that is, the flag’s own right, or if there is a line of other flags, in front of the center of that line.

A. The Flag should not be displayed on a float in a parade except from a staff, or as provided in subsection (j).

B. The flag should not be draped over the hood, top, or sides or back of a vehicle or of a railroad train or boat. When the flag is displayed on a motorcar, the staff shall be fixed firmly to the chassis or clamped to the right fender.

D. The flag of the United States of America, when it is displayed with another flag against a wall from crossed staffs, should be on the right, the flag’s own right, and its staff should be in front of the other flag.

E. The flag of the United States of America should be at the center and at the highest point of the group when a number of flags of States or localities or pennants of societies are grouped and displayed from staffs.

F. When flags of States, cities or localities, or pennants of societies are flown on the same halyard with the flag of the United States, the latter should always be at the peak.

H. When flags of two or more nations are displayed, they are to be flown from separate staffs of the same height. The flags should be of approximately equal size. International usage forbids the display of the flag of one nation above that of another nation in time of peace.

K. When the flag is displayed over the middle of the street, it should be suspended vertically with the union to the north in an east and west street or to the east in a north to south street.

M. The flag should form a distinctive feature of the ceremony of unveiling, a statue or monument, but it should never be used as the covering for the statue or the monument.

N. The flag, when flown at half-staff, should be first hoisted to the peak of an instant and then lowered to the half-staff position. The flag should be again raised to the peak before it is lowered for the day. On Memorial Day the flag should be displayed at half-staff until noon only, then raised to the top of the staff. By order of the President, the flag shall be flown at Half-staff upon the death of principal figures of the United States Government and the Governor of a State, territory of possession, as a mark of respect to their memory. In the event of the death of other officials or foreign dignitaries, the flag is to be displayed at half-staff according to presidential instructions or orders, or in accordance with recognized customs or practices not inconsistent with the law. In the event of death of a present or former official of the Government of any state, territory or possession of the United States, the Governor of that State, territory or possession may proclaim that the National flag shall be flown at half-staff. The flag shall be flown at half-staff thirty days from the death of the President or a former President; ten days from the death of a Vice President, the Chief of Justice or a retired Chief of Justice of the United States, or the Speaker of the House of Representatives; from the day of death until Interment of an Associate Justice of the Supreme Court; a Secretary of an executive or military department, a former Vice President, or the Governor of the State, territory or possession; and on the day of death and the following day for a member of congress. As used in this subsection,

1. The term “half-staff” means the position of the flag when it is one-half the distance between the top and bottom of the staff;

2. The term “executive or military department’ means any agency listed under Sections 101 and 102 of Title 5, United States Code; and

3. The term “Member of Congress” means Senator, a Representative, a Delegate, or the Resident Commissioner from Puerto Rico.

O. When the flag is used to cover a casket, it should be so placed that the union is at the head and over the left shoulder. The flag should not be lowered in the grave or allowed to touch the ground.

That no disrespect should be shown to the flag of United States of America; the flag should not be dipped to any person or thing. Regimental colors state flags and organizations or institutional flags are to be dipped as mark of honor.

A. The flag should never be displayed with the union down, except as a signal of dire distress in instances of extreme danger to life or property.

B. The flag should never touch anything beneath it, such as the ground, the floor, water or merchandise.

C. The flag should never be carried flat or horizontally, but always aloft and free.

D. The flag should never be used as wearing apparel, bedding, or drapery. It should never be festooned, drawn back, nor up, in folds, but always allowed to fall free. Bunting of blue, white and red, always arranged with the blue above, the white in the middle and red below, should be used for covering a speaker’s desk, draping the front of the platform, and for decoration in general.

E. The flag should never be fastened, displayed, used or stored in such manner as to permit it to be easily torn, soiled or damaged in any way.

F. The flag should never be used as a covering for a ceiling.

G. The flag should never have been placed upon it, nor on any part of it, nor attached to it any mark, insignia, letter, word, figure, design, picture or drawing of any nature.

H. The flag should never be used as a receptacle for receiving, holding, carrying or delivering anything.

I. The flag should never be used for advertising purpose in any manner whatsoever. It should not be embroidered on such articles as cushions or handkerchiefs and the like, printed or impressed on paper napkins or boxes or anything that is designed for temporary use and discard. Advertising should not be fastened to a staff or halyard from which the flag is flown.

J. No part of the flag should ever be used as a costume or athletic uniform. However, a flag patch may be affixed to the uniform of military personnel, firemen, policemen and members of patriotic organizations, The flag represents a living country and is itself considered a living thing. Therefore, the lapel flag pin being a replica, should be worn on the left lapel near the heart.

K. The flag, when it is in such condition that it is no longer a fitting emblem or display, should be destroyed in a dignified way, preferably by burning.

During the ceremony of hoisting or lowering the flag or when the flag is passing in a parade or in review, all persons present except those in uniform should face the flag and stand at attention with the right hand over the heart. Those present in uniform should render the military salute. When not in uniform, men should remove the headdress with their right hand and hold it at the left shoulder, the hand being over the heart. Aliens should stand at attention. The salute to the flag in a moving column should be rendered at the moment the flag passes.